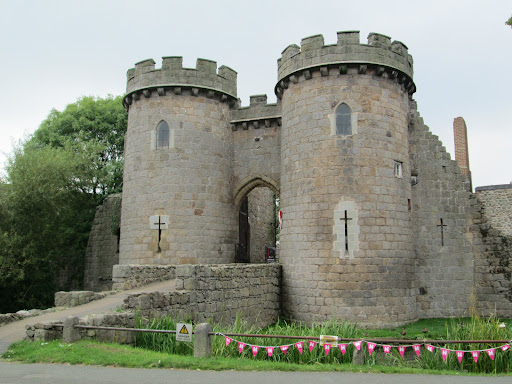 Guest post by Adrian Price  Dr Adrian Price is a former Senior Lecturer in Welsh at the University of Glamorgan and during that time he also lectured on Welsh and Celtic history. Picture of Whittington Castle Gatehouse, by Attic Tapestry, via Wikipedia Creative Licence.  A few days ago I published a blogpost titled  Whittington Castle and the romance of Fouk Fitz Warine Delighted to find that a WWW contact of mine, Adrian Price, had written a longer and  more thorough piece about Fouke Fitz Warine, which originally appeared in an anthology titled 'Bandit Territories : British Outlaws and Their Traditions' edited by Helen Phillips , first published 2008. And have agreed with Adrian to share as a guest post. There is a particular emphasis on Fouk's connection to Wales. I have reproduced without editing. FOUKE FITZ WARYN The first outlaw with a Welsh connection who merits attention
Post a comment
Read more 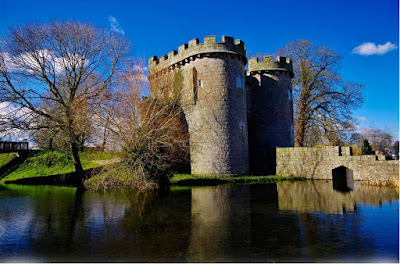 Update.  Have just  published a longer  Guest post by Adrian Price  which has a particular emphasis on Fouk's connections to Wales                                 Picture of Whittington Castle courtesy of Joy Duddell I first heard of Whittington Castle,Owestery, Shropshire  via a financial appeal to help manage the impact of lockdown that started to appear on Facebook   Please see appeal update at the end of this post.  It seems most likely that Whittington Castle was built around 1090-1100. In 1138 the Empress Maud fortified the Castle during her war with King Stephen.  The Castle's website has a helpful  Timeline   with many references to the Fouke/ Fulk family who gained control of Whittington Castle. The most famous family members , Fouk II and Fouk III feature in the romance known as 'The History of Fulk Fitz-Warine, an outlawed Baron in the Reign of King John' . The first version  transcribed from the Medieval French   was by one  Thomas Duffus
Post a comment
Read more 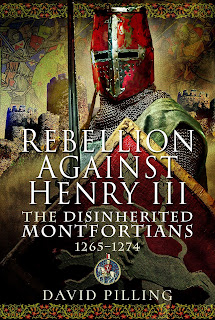 'Rebellion Against Henry III- The Disinherited Montfortians 1265-1274'- David Pilling On 4th August 1265 the Second Barons War is said to have ended, with  Simon de Montfort and his eldest son Henry , along with  some 34  rebel noblemen ,were killed at the Battle of  Evesham ( The contemporary ideal of chivalry seemed to be largely overlooked), A rebel army had been caught, trapped and soundly defeated by Lord Edward and the Royalists. Henry III was released from rebel captivity.  Mr Pilling's book presents a strong case to argue that Evesham did not end a wider rebellion  against the Crown.And very convincing he is too. For a start  there were still diehard supporters of Simon de Montfort who were not going to surrender quietly, most notably under the command of Simon de Montfort the Younger at Kenilworth Castle. Furthermore de Montfort's widow Eleanor, held on to Dover Castle, had support in the Cinque Port Towns . The book demonstrates that  the Crown, by i
Post a comment
Read more 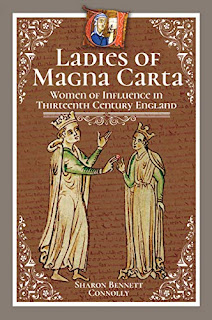 Women of Influence in Thirteenth Century England Magna Carta clause 39: No man shall be taken, imprisoned, outlawed, banished or in any way destroyed, nor will we proceed against or prosecute him, except by the lawful judgement of his peers or by the law of the land. This clause in Magna Carta was in response to the appalling imprisonment and starvation of Matilda de Braose, the wife of one of King John’s barons. Matilda was not the only woman who influenced, or was influenced by, the 1215 Charter of Liberties, now known as Magna Carta. Women from many of the great families of England were affected by the far-reaching legacy of Magna Carta, from their experiences in the civil war and as hostages, to calling on its use to protect their property and rights as widows  Sharon Bennett Connolly.  Source: historytheinterestingbits.com This book is highly recommended and the author is a very skilful as a historian. Has the gift to explain the history of the ti
Post a comment
Read more 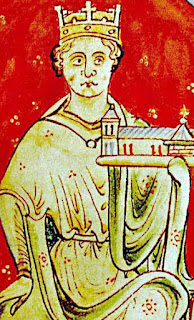 Some thoughts on Bouvines- An important but unknown battle                                                                           1827 painting of the battle by Horace Vernet, in the public domain courtesy of Wikipedia Hope all blog readers are surviving these strange times . I have quite a number of blog-posts half written, but am not in position to cross reference my work with lockdown being in place and the closure of libraries . Decided instead to share my thoughts about the Battle of Bouvines 1214. Never recall this battle being mentioned at school, yet the defeat of the alliance between England, Flanders and the Holy Roman empires ( and others) at the hands of Philip of Augustus of France had a far reaching impact on Western Europe. Said defeat was also a major contention leading to Magna Carta. Strange how relatively unknown the battle is in the English speaking world, though certainly some historians acknowledge the significance of the battle- Marc Morris
4 comments
Read more 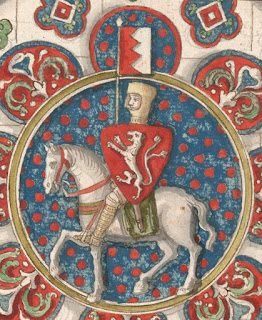 Simon de Montfort as a Revolutionary ?                                       Drawing of a stained glass window of Chartres Cathedral, depicting Simon de Montfort, courtesy Wikipedia This is a first of a serious of posts about 1258, and how this year radically changed the way England was governed. Amongst the reforms achieved were that a Council of fifteen was to be elected who would have the right to choose who the King appointed as ministers and could regulate the use of the King's seal. It's hard to find evidence of  such an arrangement in other European countries. Parliament  was to meet three times a year on fixed dates. The harsh weather conditions as from 1257 and the ghastly  famine of the time has been already covered in this blog.  The barons challenge to the kingship of Henry III in 1258 did not lead to civil war- in fact the related conflict usually known as the  Second Barons War- did not break out until 1264. Yet 1258, saw the
1 comment
Read more
More posts